How E-Signature Software Wins Over Traditional One

In today’s world, conducting business has become increasingly complicated and more demanding. As more and more businesses rely on electronic data in order to do their work, they also require the use of electronic signatures as they are designed to be valid only if done electronically. With these needs in mind, many services are dedicated specifically to the purpose of providing businesses with an e-signature capability. Electronic signature software is becoming a common option for any company who wishes to integrate this feature in their current system for preparing legal documents, or set up a separate system just for signing documents through e-signatures. 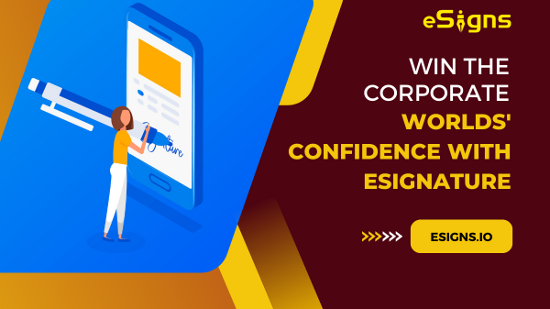 The purpose of this article is to explore the advantages of using e-signatures over traditional handwritten signatures.

eSignature software offers many benefits to companies involved in contract signing since they can greatly reduce both time and money spent on contract administration. The most important benefit is that e-signatures provide an immediate and legally binding effect.

This means that the signature is instantaneous and it assures legal effectiveness based on the principle of “ready acceptance”. Electronic signing provides immediate availability to documents in view of their unique nature, which is a contrast to traditional paper-bound methods.

E-signatures are not just easy to obtain but can be easily stored for later use. These signatures also offer safety since they are highly secure, thus ensuring confidentiality and integrity of records.

The e-signature process is much faster than traditional signing methods due to the elimination of many steps in the process such as printing, delivery, obtaining an approval and returning signed copies back to the company.

The process of signing is simplified, thus reducing the amount of signatures needed and saving both time and money. E-signatures guarantee that the signing was done by a particular individual, thereby ensuring security and accountability.

The expense to implement an e-signature system is considerably lower than the cost of implementing traditional signing systems. Important costs are usually reduced to computer hardware, software and maintenance services which are offered by a service provider for an annual fee. The cost of updating e-signatures may also be reduced to only a few minutes. In addition, several features are offered with e-signature systems such as customized design and layout as well as integration with existing systems such as accounting and tracking software. This allows businesses to customize their own systems, which reduces the time spent on integration.

Any business involved in a high volume of transactions can benefit from e-signatures by reducing the time needed to sign documents and the money involved in doing these transactions.

The e-signature process is easy and can be integrated into existing systems with little effort. In addition, any company that is already using computers would be able to use this system right away; therefore, no additional training is required to implement this form of signature. Start up costs are low since it only requires a one-time investment with no maintenance fee or subscriptions.

The main disadvantage of traditional signatures is that they are not accepted in all countries. Some countries have opted not to accept this kind of signature as binding. In addition, in some cases it may be difficult to prove the identity of the signer of the document, which makes traditional signatures illegal. Besides, electronic signatures face the same as they do not offer a physical evidence that can be used as proof in court. In addition, legal systems are still developing and cannot support its use on documents such as marriage certificates because they do not have a legally recognized value.

Another advantage is that e-signatures can be used in a number of different forms, including signature applications and signature block integration. These different methods allow e-signatures to be used for document preparation as well as for specific purposes such as sending contracts to customers and signing contracts.

Signers are able to choose from three different styles of attached or embedded signatures: simple, self-generated or generated by a third party.

The majority of electronic signature software support more advanced option is a self-generated electronic signature, which captures the individual’s biometric data such as their voice, fingerprint and/or iris. This method does not require the use of any third party in the process; therefore, it can be seen as safe and convenient.

The main advantage of attached signatures is that they cannot be easily altered since it relies on secured sources to create such signatures. Therefore, they are valued as reliable since they are dependent on the integrity of others in addition to the signer themselves.

With the rise of technology, businesses are looking for new ways to boost efficiency and they are starting to look beyond the traditional methods. One alternative business owners can explore is e-signatures, a newer type of signing that works with electronic documents.

The benefits of using e-signature software over paper or pen signatures vary depending on the company. For example, an insurance company can pay less for storage space and search for old contracts through digitized records that have e-signatures.

E-signature software also allows you to share contracts more easily with clients and coworkers because it’s easier to track who is making changes and when they’re made – something paper or digital files can’t manage as well.

Unlike any other electronic document management solution, eSigns is designed both individuals as well as enterprises, and corporate businesses, enabling role based contact type categorization.

Easy-To-Use interface lets you spend less time to get your paperwork done, so you close the deals faster. Real-time notifications and alerts keep you in sync with logs, status and pending info, you can take quick actions.

No problem if you’re busy in the midway, you can just hop-in back whenever you a free to resume and complete the document work. Once you create a template for your document in eSigns, it can be reused whenever required, so it save your time.

How to Stay Updated With Your Country News?

What Happens When You’re Low on Electrolytes?

What Happens When You're Low on Electrolytes?